Terry Halpin shares a review of his experience since studying with Wealth Within. According to Terry, his future holds financial freedom and more travel now that he is applying the knowledge he learnt in the Diploma.

A resident of Albury, Terry has been trading for the last 5 years. Currently he also works part time as a Theatre Technician at a local hospital. Prior to this, Terry had his own printing business which he built from scratch to become one of the main printing companies locally. He had this business for 15 years and has since sold it. The business still runs today.

How and when did you first become interested in the markets?

I had been interested in the market for many years but never really understood the ‘scary’ stock market. I saw it as an opportunity to make money and wanted to really understand how to do it well. I watched the market reports on the news and observed discussions about it on some financial channels. This got me wondering about how the market worked. I had also seen some friends make some wins on the market.

And then what happened?

A friend noticed my interest and suggested I do a trading course. He was already half-way through the Diploma of Share Trading and Investment course at Wealth Within and mentioned how good it was.

How have you been able to learn and educate yourself about the markets?

Well let’s see! First of all, I studied the Diploma of Share Trading and Investment and completed it. So, I was ready to make some ‘easy’ money or so, I thought. Surprisingly, this didn’t happen immediately.

After a number of my trades didn’t do great, I felt overwhelmed. When I lost confidence, I pushed the studies aside.

I was ready to try something that would give me the edge, and that I thought was way easier.

You can probably guess it! I went down a path that many people try and still don’t get what they want. Yes, it was a so-called ‘black box’ program that tells you what to buy. After a lot of time, money and trying three different programs, I had very average results.

It was disappointing that these so called ‘experts’ selling software didn’t know what they were doing either.

Then out of the blue, while on holidays sitting on the rocks watching the surf roll in, I received a call. I was kindly persuaded to get focused and apply properly what I had learned in the Diploma of Share Trading and Investment. I was offered their mentoring service known as Trading Essentials which is a support service run by the traders at Wealth Within, designed to support you as you trade properly. I had access to this while I was studying the Diploma but I didn't really understand the value of it.

You see, what I really needed was to implement the structure and process that I had already learnt. Looking back, it was the right decision.

Did you make mistakes when first starting out?

I lacked confidence in myself and my process, and so while I tried to be pretty careful with my trades, I found my rules went out the window.

In essence, I really didn’t trust myself at the start. Part of the reason was because I had not applied what I had learnt in order to build my skills properly, and so that meant I didn’t stick to the rules.

I recall my thoughts during one trade in which I said to myself “I should Sell! No wait, it will turn around for sure!” Yes, I was shooting from the hip. I was guessing, not using probability.

Would you define yourself as a discretionary trader, a mechanical trader or a combination of both?

I now consider myself as a mechanical trader, as I like to follow the rules. If the analysis says buy, I buy, otherwise I’d be lost.

I use discretion with managing my watch list. I aim to focus on the stocks I have analysed on my watch list, otherwise, I would feel lost in a sea of stocks. On occasion, if I hear about a company that has announced good results I may decide to add this to my watch list and replace another stock on my list with this one.

Who have been some of your mentors and role models?

Janine Cox, the senior trader/teacher at Wealth Within, supported me to use the knowledge I had gained in the Diploma Course. She is very patient. Janine gave me confidence, showed me how to build my skills and encouraged me to get the most out of the mentoring service.

What impact have these people made on you personally as well as on your trading style?

At times I have felt very frustrated, as I was pushed outside of my comfort zone and challenged. I was made to look introspectively at my psychology and who I could be as a trader. I think I get it now.

To me, things that come too easy have no real value. Personally, now, I have a process to follow and structure, this allows me to be a calmer trader. It’s clear to me now how important having structure in trading really is.

Can you give us a brief overview of your trading style?

I first look at the fundamental data for each stock and choose from there. I create a watch list of 20 stocks and narrow it down to the best 8. Then I take all the technical knowledge that I have learned and apply it to the chart.

I feel competent as I can filter down to a number of stocks that I can really look hard at and know they are good opportunities.

Is there any one trade (win or loss) that had a profound effect on your development as a trader? If so, what did you learn from the trade?

Sirtex (SRX) was the first trade I had ever taken. I bought into the stock, it shot up and then fell.

I had marked a stop loss on the chart but didn’t use it. I bought in a euphoric state as the company had a new product they were about to launch, and the news sounded good. I didn’t have a lot of money on the trade and it was in a good profit for a while. When it fell into a loss I felt sick. I thought to myself that I should have sold when it was high. I think the stock may even have delisted down the track.

The biggest lesson from this trade was the importance of sticking to my rules.

Can you tell us about your best and worst trades?

The best is yet to come, but the worst would be Telstra because I brought at the high of $6.00 and watched it keep falling.

It was the worst trade because it kept falling and I was doing the ‘hope and pray’ method wishing it would turn around. That was annoying because I was ignoring my training and knew I should have something in place to protect my capital.

Would you classify yourself as a short-term or a long-term trader? What advice would you offer to people getting started as traders on the relative merits or otherwise of each?

I am a medium-term trader because I like to be active in the market. I would like to trade short-term with smaller amounts for more excitement, however, I’m consolidating what I am doing at the moment.

Without gaining a proper education, the only way to make a big pile of money is to start with a bigger pile. It is a joke, however, it’s actually true.

If I had my time again I would certainly use the mentoring service to make sure that I have put the appropriate structure in place. It speeds up the journey and it consolidates your learning when you are putting it into practice to trade the market.

Just the ASX. It is all I know, and I am too scared to venture outside of that just yet.

What makes your trading style different from others? What sets you apart from other traders?

I really don’t know what other traders do, however, I believe the knowledge that I have gained would set me apart from most traders.

Do you have a favourite trading rule?

I think Warren Buffet said it. There are two rules.

I don’t really have a favourite. There is a certain layout I like to see on the chart, including price analysis. I like to see trend lines so that I can clearly determine which way the stock is trending.

I am starting to get some satisfaction. Being able to determine which way the stock is likely to go is a great feeling. It’s amazing when you are right and when trades are unfolding as you expect.

How has trading affected your lifestyle?

It hasn’t affected me yet. However, it will because I am going to increasingly rely on it for income.

What books, seminars and courses have you read or attended and which would you recommend?

I have completed the Diploma of Share Trading and Investment. I plan to read Dale’s latest book Accelerate Your Wealth, It’s Your Money, Your Choice!

What does the future hold for you?

I am focused on achieving 10 to 15 per cent returns first. Ultimately, I am working towards 30 per cent. I would like to focus on trading for income.

The future holds financial freedom and more travel. My wife and I enjoy little getaways around Australia and I would like to pay for a bigger holiday once a year to Europe or the US from my trading.

Also, I’ve dreamed of buying a beach house and would probably renovate it for myself and my wife.

Back To Case Study


To receive more information about how to enrol in your chosen course, including the tuition fees.

Our friendly support staff are only a phone call away. 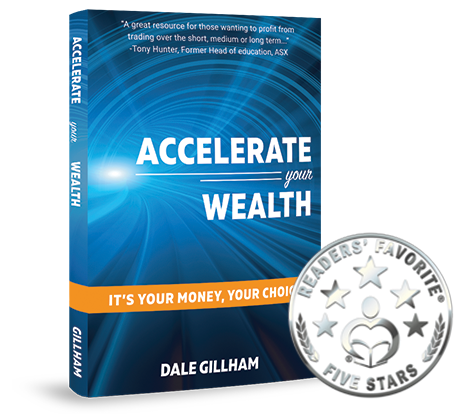