How to Identify Trading Trends

In this week's Australian Stock Market Show Dale Gillham and Janine Cox share with you how to identify trading trends and how to trade with the trend.

No doubt some of you will have heard that trends represent the basic foundation of trading any market. Sayings such as “the trend is your friend” and “always trade with the trend” are common place in books or courses about trading.

Unfortunately, the 90 per cent of individuals who lose money in the markets today do so because they unknowingly break from this basic foundation of trading by trading counter to the trend. However, when trading the stock market, the carved-in-stone rule you must always remember is this: All trends conform to a longer-term, existing trend.

Unfortunately, at this point in time, many people fall into the trap of believing a new uptrend is unfolding, and they attempt to buy at the bottom for fear of missing out on the potential rise.

The cold reality is that, often, the market turns down again, causing the individual to suffer more losses. Acting on this low probability of a potential change in trend is not conducive to good trading.

In short, you should always trade with the trend.

What is a trend and how do you identify trends?

Therefore, an uptrend is the result of a rising movement in market prices, which is confirmed by a series of higher peaks and troughs. A rising stock is said to be bullish indicating there are more buyers than sellers. 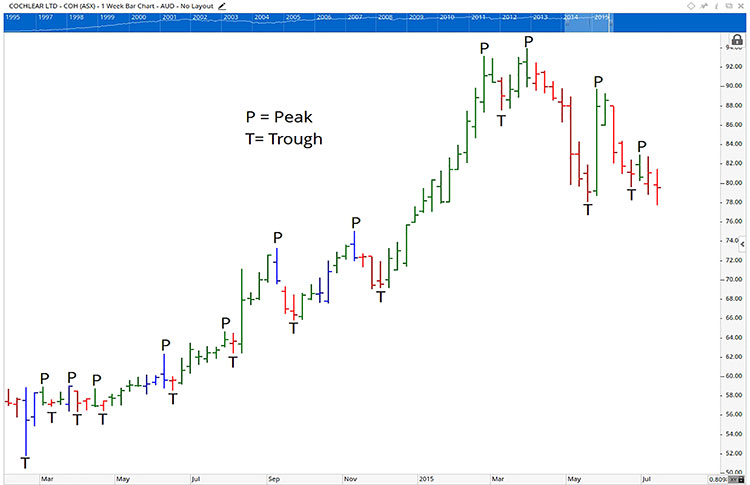 Meanwhile, a downtrend is caused by a falling movement in market prices, and is confirmed by a series of lower peaks and troughs. A falling stock, on the other hand, is said to be bearish, indicating there are more sellers than buyers. 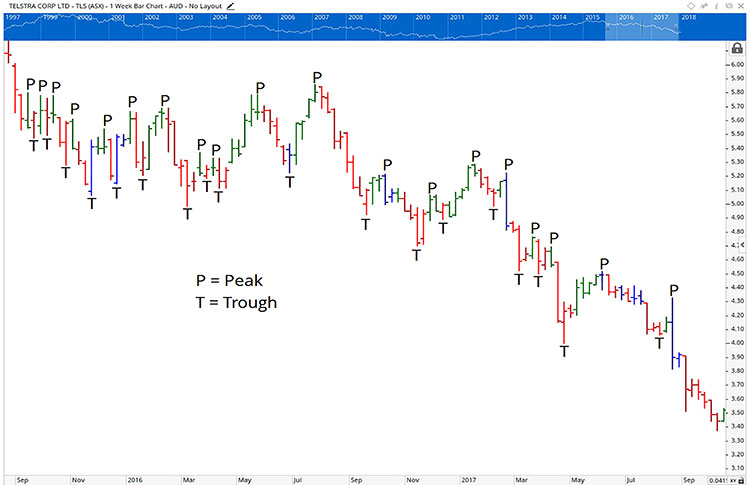 What to consider when trading trends?

A major consideration when investing over the long term is the direction of the trend over the longer term and, to a lesser extent, the medium term. Therefore, you will gauge a lot of what you need to know by analysing the trends of a stock on a monthly chart.

If, however, you are trading over the medium term, the major consideration is the direction of the trend over the medium term and, to a lesser extent, the shorter term. Given this, you will gauge a lot of what you need to know by analysing the trends of a stock on a weekly and monthly chart.

The major consideration when investing over the short term is the direction of the trend over the medium term; therefore, you will gauge a lot of what you need to know by analysing the trends of a stock on a weekly chart.

When viewing a chart, you will be able to tell that the price of a stock is rising if it has successively higher bars.On a monthly chart, stocks that rise over three or more consecutive months are said to be in an uptrend while on a week, this equates to twelve or more bars moving in an uptrend.

Obviously, this statement is not flawless, as a stock can rise for three months (or twelve weeks) and then move sideways or down. However, it does provide a starting point from which you can analyse the strength of a stock.

Let’s look at some examples.

How to trade trends in the stock market

The monthly chart of Aristocrat Leisure represents the stock as it rose in price from 2003 to early September 2019, where the trend changed from up to down before returning to trade in an uptrend again. 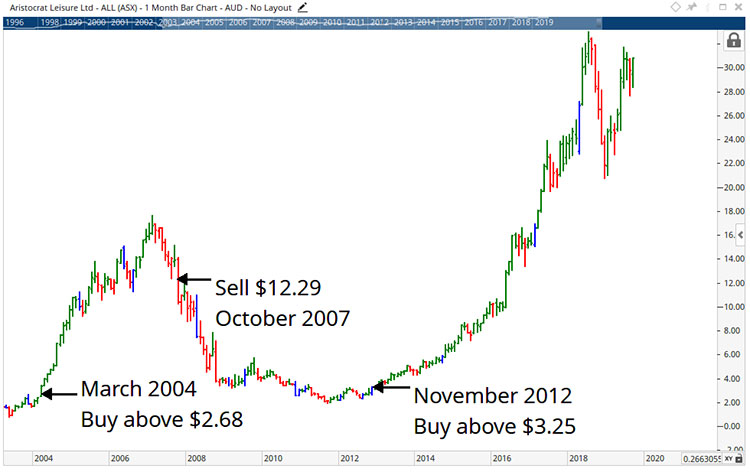 Depending on your confidence level, you might have entered the stock some time late in 2003 after it had been trending up for more than 3 consecutive months.

But even if you had waited until sometime in early 2004, when the price of the stock was approximately $2.70, you would still have made around 360 per cent, excluding dividends, before selling in 2007 at a point where the stock had fallen more than 30 per cent in price, using very conservative entry and exit rules.

Not every stock will give you this sort of profit, but most blue chip companies usually yield around twenty to fifty per cent or more in growth in an uptrend.

So what is the monthly chart of Westpac telling you? Once again, this is representative of a solid blue chip stock that has trended up nicely between late 1992 and early September 2019 by over 1,500 per cent, excluding dividends. 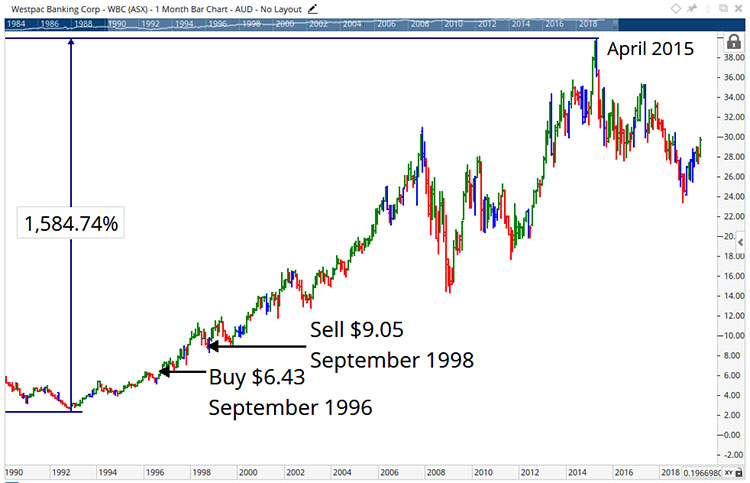 While there have been many opportunities to profit from this stock over the past twenty-five years, with the stock rising between 20 to 50 per cent or more over a few months to around three years, I have shown one trade using the same simple rules I applied on Aristocrat, with the trade making just over 40 per cent in two years.

Generally, the top 50 stocks by market capitalisation produce very steady uptrends that are easy to identify. Stocks out to the top 150, however, are a little more volatile and, therefore, require more diligence on your part if you choose to invest in them.

As with any stock, there is always an element of risk, but the educated investor can minimise this risk. Remember, you can always sell if you are wrong in your analysis.

To learn how to gain more confidence in trading trends, purchase Dale Gillham's latest award winning book, Accelerate Your Wealth. It is packed with techniques and strategies that will enable you to take a low risk approach to profiting from the stock market.

Invest in yourself. Study with Wealth Within now to fast track your stock market education and begin the journey toward financial freedom. Because lifestyle matters!

Learn More About Our Trading Courses